SEMI-THERM thermal conference is a week full of technical presentations, exhibits, short courses, how to courses, and panel discussions.

These four-hour classes provide practical, interactive training on a variety of specific skills on topics ranging from thermal design & modeling to system level validation testing. Some are designed for those who are relatively new to thermal management. As such, they focus on basic concepts and techniques. Other classes are meant for seasoned thermal engineers wanting to gain deeper insight into best-in-class tools and practices. Attendees can choose one Short Course in the morning and one in the afternoon.

The course will then delve into the various numerical methods used to solve heat transfer problems in CFD, including the finite volume method. Attendees will also learn about the different algorithms and solvers used in heat transfer simulations.

The course will conclude with hands-on exercises on a 1D heat transfer problem, giving attendees the opportunity to apply the concepts and methods learned during the course. By the end of the course, attendees will have a solid understanding of the governing equations, numerical methods, and best practices used in CFD simulations of heat transfer and be able to apply these techniques to their own projects.

Ine Vandebeek is Head of R&D at Diabatix. She studied at the University of Ghent, where she obtained her degree in civil engineering. After graduation, she spent five years at the university as a researcher, during which time she investigated the numerical modeling of beach profile dynamics. Then she joined the Belgian company Diabatix as an R&D engineer. After two years, she was promoted to the position of ‘Head of R&D.’ In this role, she leads the in-house R&D team and is responsible for setting up and implementing the development roadmap.

Dr. Lieven Vervecken is CEO and co-founder of Diabatix, a software company specialized in advanced thermal design. Prior to founding Diabatix, Lieven received a PhD in mechanical engineering from the renowned University of Leuven, in the field of numerical simulations. Lieven incorporated his expertise into the advanced AI technology that lies at the heart of Diabatix. What started out as a small venture has become a fast-growing SaaS company serving multinationals all over the world. Lieven is lead author of multiple peer-reviewed journal articles and he is an experienced keynote speaker at national and international conferences.

The course will start by providing an explanation of the physics behind heat pipes, and then using this foundational knowledge to explain micro-channel, loop and pulsating heat pipes. The lecturer will then present the trade-offs between the different heat pipe technologies including both thermal, mechanical, and environmental constraints.

The course will then focus on applying the technologies to real-world applications, including presenting some concrete examples that Calyos has already worked on.

The room will then break for a brainstorming session where attendees can take a real-world application they imagine (based on their expertise). They will then discuss with the people around them and select an appropriate heat pipe technology for their application and note down their reasoning. The lecturers will spread throughout the room, taking questions and supporting attendees in selecting and reasoning.

Following the brainstorming session, volunteers will be asked to come and present their application and chosen technology, explaining their reasoning. The lecturers and additional experts will discuss and evaluate the technologies learning as a group.

The next stage of the session will take three of the attendee applications and break down the thermal resistance chain. This is the first step in order to estimate/simulate the performance. The lecturer will explore the physics behind each step, discussing points to note with the attendees. By adding some basic parameters to the application and using typical HTC values the team can then begin to estimate the performance of a system and show how this can be taken further (ie. With CFD, models, etc).

With over 20 years of experience in two-phase technologies, Olivier de Laet was the CEO of Euro Heat Pipes which developed two- phase cooling solutions for satellite electronic applications. He sold this company to Airbus Defense and Space but kept the technology to address the cooling challenges of the non-space electronic applications. So he incorporated Calyos that adapted the technology to the non- space environment and is now targeting the e-mobility and computing markets mainly. Prior to Euro Heat Pipes and immersing in the two- phase technology, Olivier held various management positions in corporations and holds various Master Degrees in Finance and Business Administration.

Vincent Dupont, PhD and senior researcher in diphasic cooling technologies with multiple publications, patents and awards in the area. Two- phase thermal specialist with more than 20 years of experience. Vincent started his career in the thermal industry at Euro Heat Pipes in 2013, and is currently the CTO of Calyos adapting two-phase thermal technologies for specific applications for the aeronautics, rail and automotive and computing industries. Prior to Euro Heat Pipes, Vincent was a post-doctorate researcher at EPFL. Vincent holds a PhD in Energy Systems as well as a Master Degree in Mechanical Engineer from Toulouse III University.

The future of driving is quickly evolving toward fully autonomous vehicles. The centralized compute system will serve as a nerve center for all autonomous vehicles. Without a human driver, a compute system must be able to be functional with top performance and must respond faster than the human driver at all times during its entire life to guarantee driving safety. An AV compute system usually is developed with multiple larger-size PCBs hosting multiple CPUs, AI processors, and other critical IC components as redundancy for high performance, high safety, and high-reliability AV driving. During the rigid AV compute reliability qualification, various thermal and mechanical loads are imposed onto the compute system to assure its long-term durability. Chip thermal failure under such severe environmental loads is a critical concern.

In this short course, during the first part, we will review the basic chip thermal design and its component-level reliability evaluation. During the second part, we will introduce various reliability stress tests required for compute validation per automotive industry standards. Particularly, we will show how to conduct liquid-cooled compute reliability testing and its unique impacts on chip thermal reliability. During the third part, we will cover the topic of the critical chip-system thermomechanical interaction during the compute validation test and field operation. Such interaction can impose a mechanical load on the critical interfaces along the chip thermal conduction path. Based on a compound probability distribution-based stress-strength concept, the weakest link among those critical interfaces could be compromised first to trigger a chip thermal trip event. Extensive experimental data and simulation data will be presented to show this kind of new chip thermal failure mode captured during compute system reliability testing, and the physics of failure developed to explain this kind of failure mode. Lastly, during the fourth part, we will bring ideas on how to enable reliable high-performance liquid-cooled compute by imposing thermal and mechanical co-optimization to successfully eliminate such observed chip thermal failures.

Fen Chen received his Ph.D. degree in Electrical Engineering in 1998 from the University of Delaware. From 1997 to 1998, he was with Intel Component Research in Santa Clara, CA as a graduate intern working on IC interconnect reliability. He joined IBM microelectronics at Essex Junction, VT in 1998 and had worked on semiconductor technology reliability issues until 2015. From 2015 to 2019, he worked for Apple Inc at Cupertino, CA as a senior reliability engineer focusing on the qualifications of various consumer electronic products. In 2019, he joined Lumileds in San Jose, CA as the director of quality and reliability and was responsible for qualifying novel μLED MCM products for automotive applications. After 6-month of work at Lumileds, he joined GM Cruise in 2019 and currently is a principal reliability/validation engineer. He has been working on validations of electronic, optical, and electromechanical modules for groundbreaking Cruise AV hardware systems since joined Cruise. He holds more than fifty-five patents and has published over 60 technical papers/invited talks in various journals and conference proceedings.

The capacity of liquid cooling systems to manage heat dissipation from electronics far exceeds the capacity of air-cooled systems, a fact that has been known and pursued for decades. The preference for air cooling is readily justified because of ease of use and compatibility with electronics and their reliability, but volumetric, acoustic, and flow rate limits have been reached in many cases for high power electronics. Transitioning to liquid cooling using water or refrigerants as the primary heat transfer medium requires more exacting design and adaptation of infrastructure at system and component levels to accommodate delivery of liquid flow to high power devices. This short course will introduce the physics and design of single-phase water-based cooling systems compared to pumped two-phase refrigerant-based cooling systems. The course will be useful for engineers who want to better understand the physics and the engineering thermo-fluid models and methodologies, and the pros and cons of each approach.

Topics to be covered include the following:

Useful suggested readings and references for further self-learning of the topics will be provided.

Dr. Alfonso Ortega is the James R. Birle Professor of Energy Technology at Villanova University and Professor of Mechanical and Sustainable Engineering. He is the Director of the Laboratory for Advanced Thermal and Fluid Systems which he has led for over 30 years. He is the Founding Director of the Villanova site of the NSF Center for Energy Smart Electronic Systems (ES2) founded in 2011. He currently is the co-Director of the Villanova Strategic Initiative for Climate, Justice, and Sustainability, a university wide academic initiative. Formerly he was the Associate Dean for Graduate Programs and Research in the College of Engineering and Villanova’s inaugural Associate Vice President for Research and Graduate Programs.

Dr. Ortega received his B.S. from The University of Texas-El Paso, and his M.S. and Ph.D. from Stanford University, all in Mechanical Engineering. He was on the faculty of the Department of Aerospace and Mechanical Engineering at The University of Arizona in Tucson for 18 years. For two years, he served as the Program Director for Thermal Transport and Thermal Processing in the Chemical and Transport Systems Division of The National Science Foundation, where he managed the NSF’s primary program funding heat transfer and thermal technology research in U.S. universities.

Dr. Ortega is a teacher of thermodynamics, thermal and energy sciences, thermal-fluid design, and experimental methods. He is an internationally recognized expert in thermal and energy management in electronic systems. He has supervised over 40 M.S. and Ph.D. candidates to degree completion, 5 postdoctoral researchers, and more than 70 undergraduate research students. He is the author of over 300 journal and symposia papers, book chapters, and monographs and is a frequent short course lecturer and consultant on thermal and energy management and experimental measurements.

This course will present the basic principles of linear superposition in the context of thermal analysis.

Sub topics will include:

Each Technical Session typically includes 3 brief presentations (15 minutes plus a 5 minute Q&A) summarizing the design, tests, and findings of research and development efforts. Topics include any thermally related challenge or solution from the die to the facility level. Presentations are generally based on peer reviewed academic research but may also be private sector R&D professionals working alone or as part of an inter-agency program. With over 20 presentations scheduled for the symposium, attendees should expect to have a solid overview of the latest developments in thermal management. 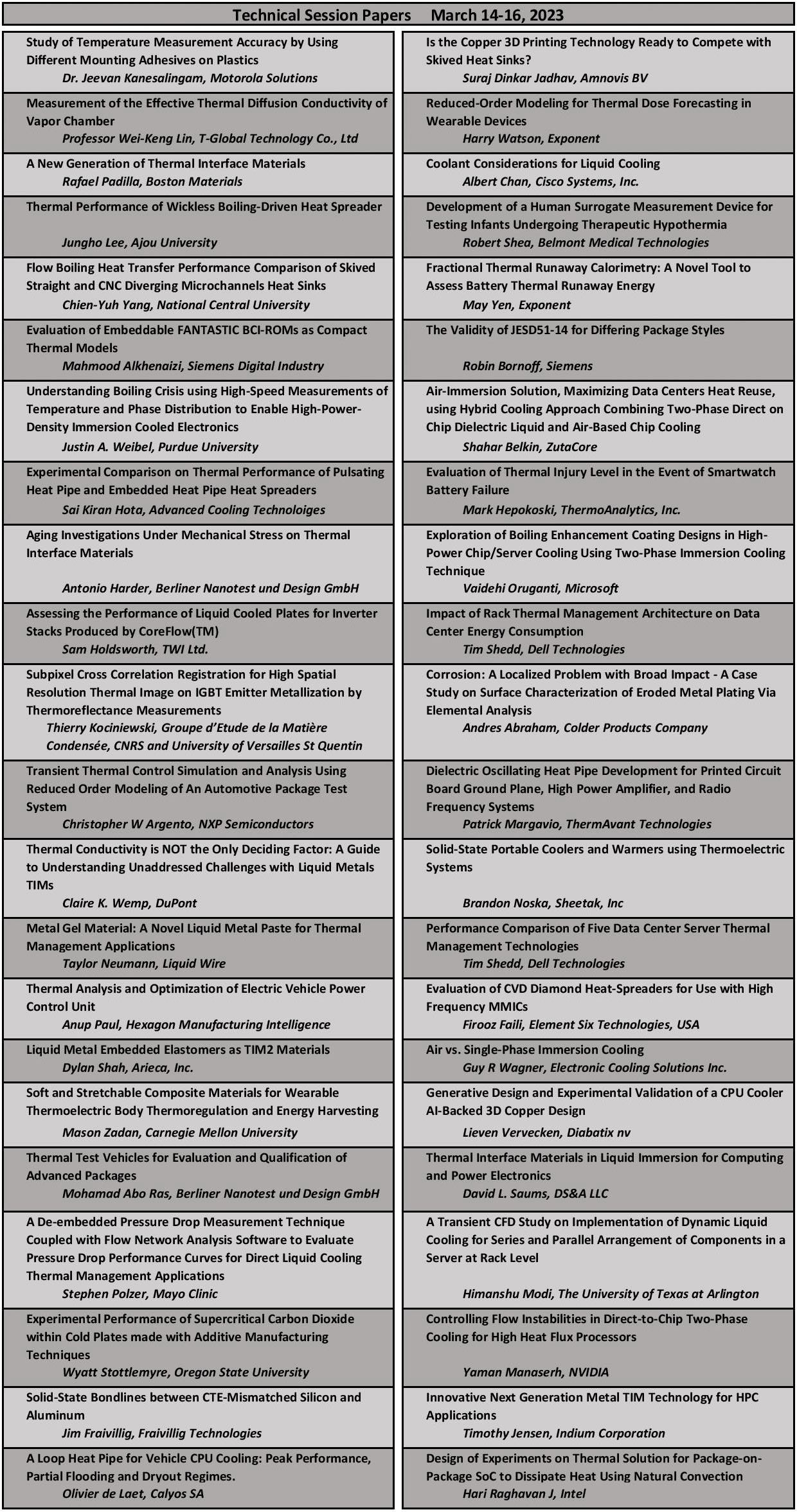 SEMI-THERM exhibitors offer a technical overview of a specific product during these 30 minute presentations. Scheduled throughout the symposium, presenters generally focus on the technical aspects of product selection, implementation and usage that are discussed as part of an engineering system / component discovery effort.

Be sure to spend some technical face time with the 20+ exhibitors that are available throughout the event to demonstrate and explain their products and services. 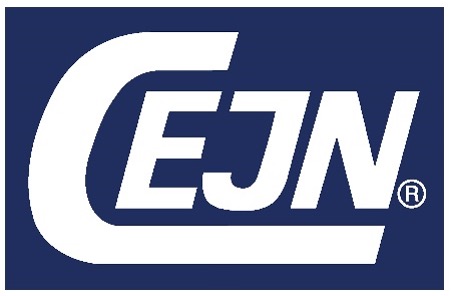